I hope everyone had a fantastic summer! Let’s get the work/school year going with a great quote from Michael Jordan: 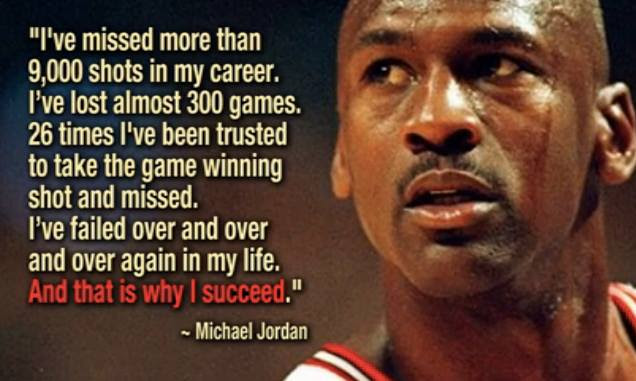 I quoted chess champ / democracy activist Garry Kasparov saying something similar in my book The 7 Secrets of the Prolific:

“Years ago, I was fortunate to hear one of my heroes, former world chess champion and current Russian democracy activist Garry Kasparov, discuss important lessons he had learned from chess. Here’s how he began his talk: “I have won hundreds of chess games, and lost thousands. You have to have the courage to fail.” The courage to fail. What an amazing phrase—and coming from a hypercompetitive chess champion it takes on a special meaning. Kasparov probably hates failure more than just about anyone—in fact, as his use of the word “courage” implies, he probably fears it—but he had to develop a tolerance for it to reach his goals. That he chose to begin his talk with this point only underscores its importance.”

Perfectionists are terrified of failure for all the reasons mentioned earlier, including that they define it too broadly, punish themselves harshly for it, identify too strongly with it so that it becomes a kind of ego-death, and are shortsightedly focused on the immediate.

To a compassionately objective (a.k.a. nonperfectionist) person, however, failure is not just inevitable, but an essential element of any ambitious path, and probably our most potent route to learning and growth. In other words, if you’re not failing at least some of the time, you’re probably not taking enough risks. Herman Melville called the willingness to fail “the true test of greatness.” Samuel Beckett famously said, “Go on failing. Go on. Only next time, try to fail better.” And Winston Churchill, who apart from his statesmanship also wrote and painted prolifically, famously defined success as arising from “the ability to go from one failure to another with no loss of enthusiasm.”

So it seems that one thing that sets apart high achievers in any field is their willingness to fail. Maybe, then, this should be the fall you take some new risks!

PS – I have, as usual at this time of year, a few open coaching slots. If the advice in The 7 Secrets of the Prolific or The Lifelong Activist has worked for you, my coaching probably will, too. I coach via phone and Google Hangouts, so you can be located anywhere. More info, including rates, here.