At a recent performance of Johannes Brahms’s First Symphony, the conductor told how, when Brahms was just starting out, the elder composer Robert Schumann praised him to the high heavens. Here’s the story:

Partly as a result of Schumann’s extravagant praise, many considered Brahms the natural successor to Beethoven, and predicted that his first symphony would be “Beethoven’s Tenth.”

It took Brahms 21 years to finish that symphony!

Followers of Carol Dweck’s work on mindset, and my own work on perfectionism, will know why: too much praise, and the wrong kind of praise.

Praise someone to the moon, and they can become terrified to disappoint you (and themselves) by falling short.

Praise their “product” (as opposed to their effort, dedication, approach, or other behavior), and they’re likely to get all perfectionist and controlling in an effort to duplicate that success.

So it’s no surprise that Brahms took decades to write his symphony. The miracle is that he was able to finish it at all.

It also probably didn’t help that, the entire time, he kept a bust of Beethoven in his study: 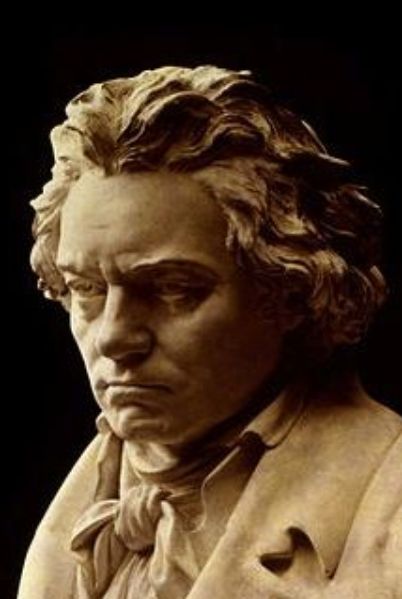 Imagine trying to work under the eye of such a brooding, scowling “office-mate!” Especially when, as Brahms himself famously put it, “You can’t have any idea what it’s like always to hear such a giant marching behind you.”

We can derive four good productivity lessons from this episode:

1) Take all praise, or criticism, with a light touch.

2) While working, create a safe (judgment-free, expectation-free) space in your head where you are free to work, play, experiment, and, most importantly, fail. Admittedly, this can be tough when you’re in the middle of an intense (positive or negative) situation, but it is a skill you can practice and improve at.

3) This is yet another example of what I call situational perfectionism, where circumstances cause your perfectionism to spike. In general, comparisons aren’t helpful–and doubly so for comparisons with “giants.”

4) Your physical environment matters, so maybe think about relocating the judge-y statuary!

And speaking of statuary: Why Rodin’s “The Thinker” Should be Renamed “The Perfectionist” (Plus, Bonus Balzac!)