So, Jan and I were treated by Professor Henry Horng-Shing Lu (provost of National Chiao Tung University in Hsinchu, Taiwan, where Jan is a visiting professor) to a visit to Beipu, a traditional Hakka village. Hakka are descendants of mainland Chinese settlers who came to Taiwan over the past few hundred years prior to the 1949 Civil War.

While there, we visited a traditional Hakka “thunder tea” (lei cha) house, where you’re supposed to grind your own tea. You’re given a big bowl (mortar) containing a small amount of green tea, and a smaller bowl containing a blend of peanuts, pistachios, and sesame seeds. (Yum! And healthy!) You add the latter to the former, grind it all into a fine (key word) powder, add boiling water, and enjoy your tea.

And so our saga begins…

Despite my insistence that I’m there in a purely supervisory role I am (briefly) pressed into service.

After fifteen minutes of hard work, it’s still not as finely ground as it needs to be.

We weren’t the only ones working hard! (Note: similar worker / supervisor dynamic!)

ANOTHER supervisor pressed into service!

Finally, the real supervisor comes over to inspect our progress. Obviously not impressed.

She demonstrates proper technique. (Hold the top of the pestle stationary, while revolving the bottom of it rapidly around the bowl’s inner wall, smashing the tea, etc., against the wall.)

She finishes the job lickety-split, and adds hot water. At last we have our tea!

You drink it with a few grains of rice. (Random Internet picture; I was too thirsty to take a pic.) Delicious! 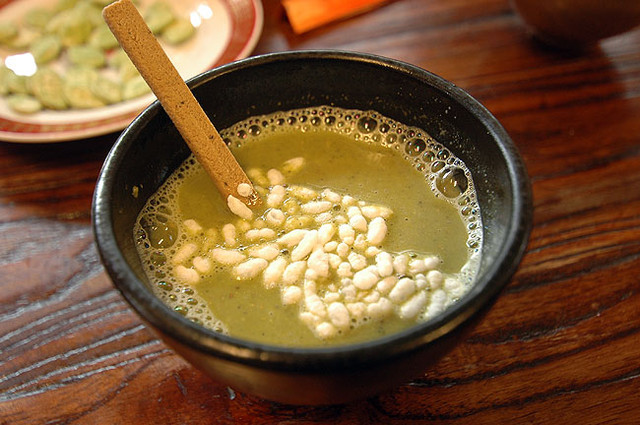 Total preparation time, about thirty minutes. But worth the wait! By the way, this very cool tea house is called Folk Song and Lei Cha because the nice owner is also a musician.