Why Rodin’s “The Thinker” Should be Renamed “The Perfectionist” (Plus, Bonus Balzac!)

Auguste Rodin’s famous “The Thinker” statue (1902) is, all by itself, probably responsible for many cases of perfectionism and procrastination. It’s such a forceful statement that some, looking at it, probably think, “So THAT’S what intellectual work is supposed to look like! A grinding inner struggle! I’d better aim for that, and if my work comes too easily–or, if it’s actually fun–I must be doing something wrong.”

Another problem is that The Thinker looks pretty miserable. Check out his deeply furrowed brow, tense muscles, and utter lack of joy. His seat also doesn’t look very comfortable. Even if we could think our way through problems, most of us can’t tolerate prolonged physical discomfort.

What The Thinker really is doing is “pondering,” which I call “the academic disease” because scholars, in particular, are prone to do it. Pondering is not the same as working, and you should avoid it. When you sit down to work, don’t have a big ponder–just start working, and work out your problems in the course of doing the work. But be sure you’re working in a lighthearted, experimental, playful frame of mind, or you’ll risk falling into perfectionism if your early efforts prove disappointing, which they almost always do. (Recall Anne Lamott’s useful dictum, from Bird by Bird, that every piece of writing begins with a, “shitty first draft.”)

The alternative is to sit there and ponder…and ponder…and ponder until finally either, (a) inspiration strikes, or (b) your deadline looms and you start working out of desperation. (Outcome b is far more likely.) Pondering makes you ponderous, and it leads to ponderous work.

Of course, there’s always been the sense that The Thinker was over the top, and it’s been parodied every which way. A common parody is The Thinker sitting on a toilet, which embodies (both figuratively and literally!) the whole “pondering as mental constipation” thing. (Here’s an example.)

Actually, The Thinker embodies perfectionism. The statue is reductive (he’s not even wearing any clothes!) and grandiose. It valorizes suffering, and deprecates the true processes of creation. Let’s just rename him “The Perfectionist” and get it over with! 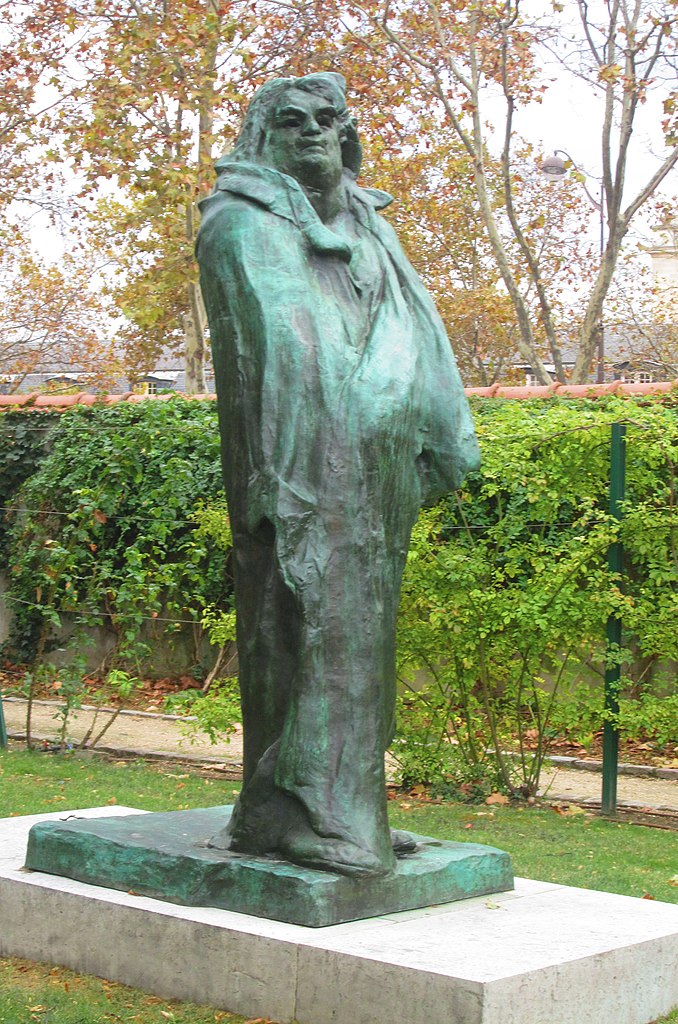 Interestingly, Rodin did another piece that really does capture the spirit of a prolific creator, his famous Monument to Balzac (1891). It was done in honor of writer Honoré de Balzac, who wrote dozens of books and hundreds of short pieces. Even the statue’s facial expression exemplifies nonperfectionism. Rodin has Balzac gazing into the distance, his gaze only slightly elevated. He is taking the long view–a sure sign of wisdom–and his outlook is somewhat aspirational, but he remains overwhelmingly engaged in the real world he inhabits. (Contrast with the numerous cheesy artworks out there in which the subject’s gaze is directed rapturously heavenward, representing, I suppose, “divine inspiration”–which happens to be yet another perfectionist trope!)

Rodin researched his subject for years before starting to sculpt. Obviously, I think he succeeded magnificently at his goal of portraying an extraordinary artist. However, the critics and public disagreed! They considered the work “disrespectful” and the commissioning body, The Société des Gens de Lettres, rejected it. Now, however, it’s considered a masterpiece and, with its focus on the subject’s psychology, as opposed to his physical characteristics and writerly “props” (e.g., desk), one of the first truly modern sculptures. (Which is perhaps why it holds place of pride in MoMa’s lobby. (EDIT: During COVID, the museum reorganized its collection, and disappointingly the Balzac was moved from the lobby.)

Is there a piece of artwork (your own or someone else’s) you feel exemplifies either perfectionism or nonperfectionism (a.k.a., compassionate objectivity)? If so, please tell us about it!